In 2016 a large group of volunteers was recruited to sample a broad geography within the Intermountain West. This report presents results that identify specific habitat associations, confirming that habitat use may vary regionally. CLICK HERE TO VIEW PDF.

ABSTRACT. The Short-eared Owl is an open-country species breeding in the northern United States and Canada, and has likely experienced a long-term, range-wide, and substantial decline. However, the cause and magnitude of the decline is not well understood. Booms et al. (2014) proposed six conservation priorities to be addressed for this species. We set forth to address the first two: 1) better define habitat use and 2) improve population monitoring. We recruited 204 volunteers to survey over 9.5 million ha within the state of Idaho and 7.8 million ha within the state of Utah for Short-eared Owls during the 2016 breeding season. We surveyed 98 transects, 94 of which were surveyed twice, and detected Short-eared Owls on 20 transects. We performed multi-scale occupancy modeling to identify habitat associations, and performed multi-scale abundance modeling to generate state-wide population estimates. Our results suggest that within the Intermountain West, Short-eared Owls are more often found in areas with greater amounts of sagebrush habitat and lesser amounts of grassland habitat at the 1750ha transect scale. At the 50ha point scale, Short-eared Owls tend to associate positively with stubble agriculture and negatively with bare dirt (plowed) agriculture. Cropland was not chosen at the broader transect scale suggesting that Short-eared Owls may prefer more heterogeneous landscapes. On the surface our results may seem contradictory to the presumed land use by a “grassland” species; however, many of the grasslands of the Intermountain West, consisting largely of invasive cheatgrass, lack the complex structure shown to be preferred by these owls. We suggest the local adaptation to agriculture represents the next best habitat to their historical native habitat preferences. Regardless, we have confirmed regional differences which should be considered in conservation planning for this species. Importantly, our results demonstrate the feasibility, efficiency, and effectiveness of utilizing public participation in scientific research (i.e., citizen scientists) to achieve a robust sampling methodology across the broad geography of the Intermountain West. 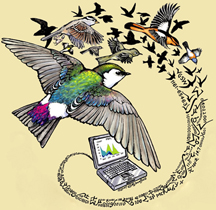